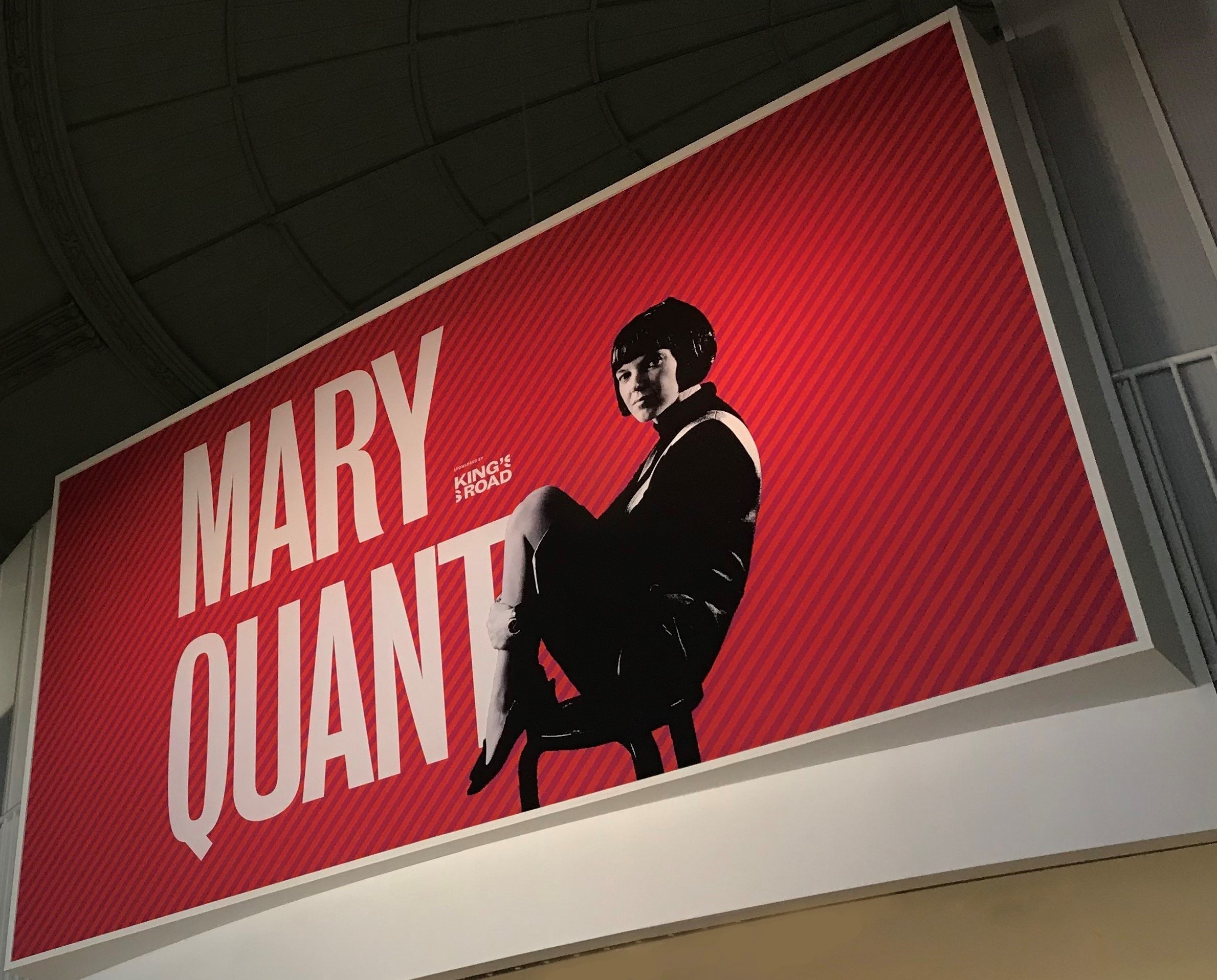 Mary Quant at the V+A

The overwhelming message we took from the exhibition, other than her obvious talent as a fashion designer, is her mastery of brand identity and business acumen.

The first fashion designer with a portfolio brand, Quant led the way.

The exhibition documented the journey and portfolio of her iconic brand, but offered only glimpses of how she actually achieved her success.

As early as 1955 her future husband and a friend opened the boutique, ‘Bazaar’ on the Kings road. Even at this stage the concept was shrewd; with a shop at the ground floor and restaurant in the basement. In one fell swoop doubling the footfall and attracting a legion of creative friends from their days at Goldsmiths. And then of course their friends – creative, educated, connected and young.

Using architecture to communicate the ethos

There was an obvious desire to want to stand out further, not just with the merchandise but with the premises.

The stuffy Victorian façade was stripped away, replaced instead with crisp, clean frontage, providing the perfect picture frame for the merchandise. Announcing their arrival loudly on the Kings Road. 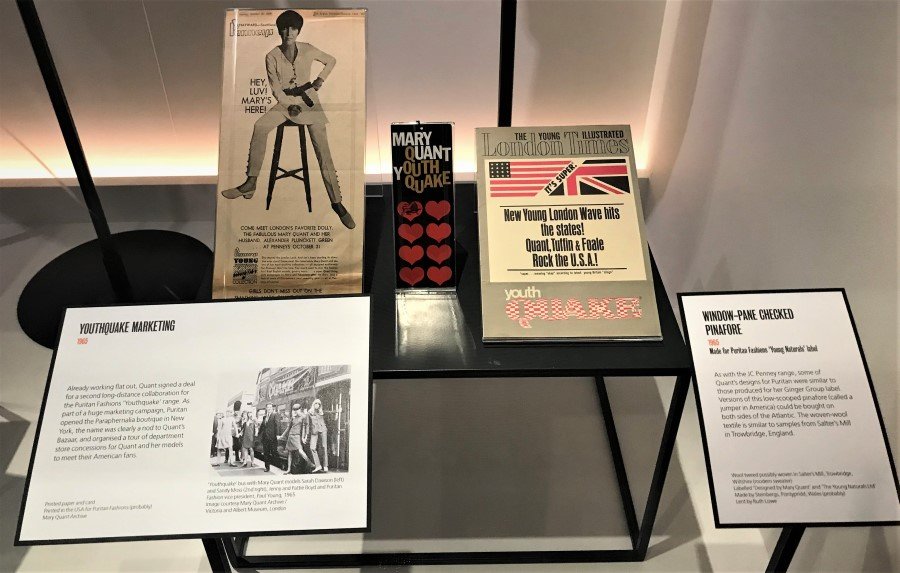 A ‘look’ born from youth, creativity and a gap in the market

At this early stage Quant was the buyer, although she did include a few of her designs. These were immediately snapped-up by the fashion press and copied by others. Clearly there was an appetite for her ideas. They sold quickly and she took evening sewing classes to hone her skills, working round-the-clock to keep up with demand. Showing a hunger to learn the skills she needed to realise her creations.

The origins of her ‘look’ were relatively humble, coming from her desire to wear something different from what was available in the post-war Britain: more reflective of her youth and creativity. She took easy-to-make Butterick paper patterns and adapted them: simplifying them to create a more modernist aesthetic – initially with a more than substantial nod to 1920s fashion fused with the sharpness of the Mod culture.

She wasn’t afraid to experiment and played with fabrics more associated with men’s tailoring. She embraced Jersey fabric for its practicality plus fluidity, and sourced new-mass produced fabrics from America.

Her look was quintessentially rooted in England and loved on both sides of the Atlantic. 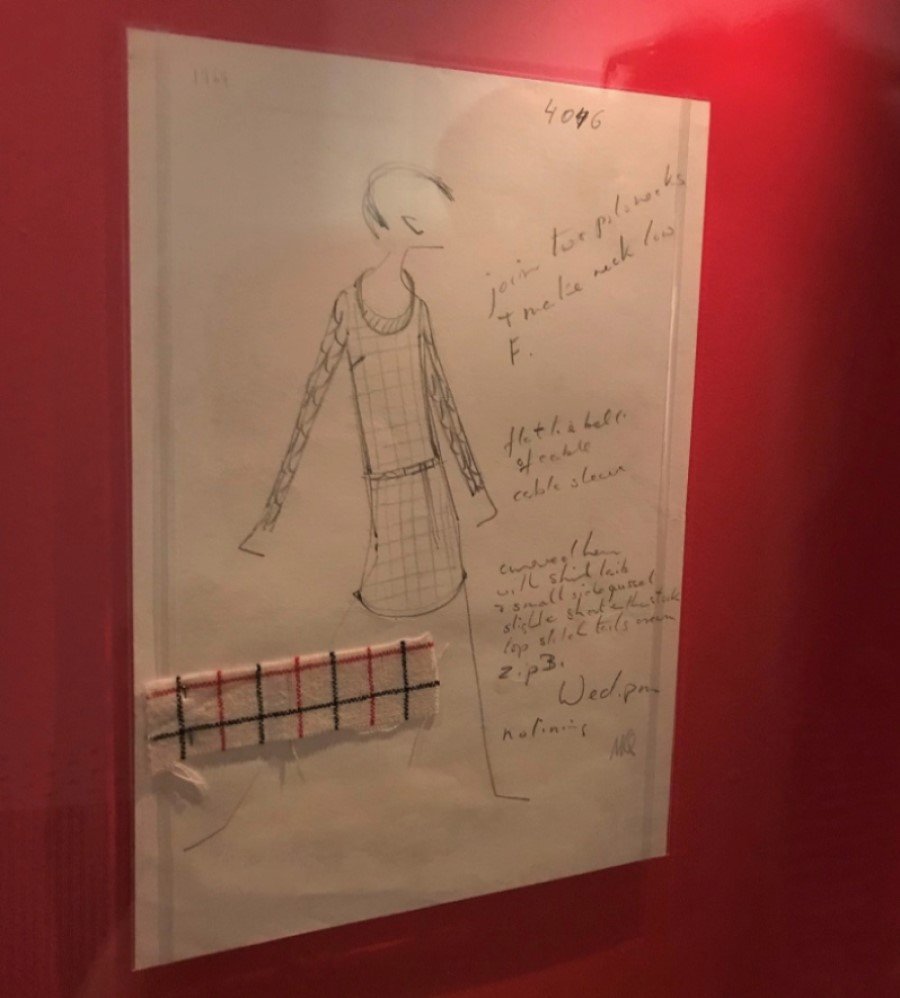 It’s unclear at what point the daisy logo appeared, but this too encapsulated her brand. Simple, clean, easily recognizable and youthful – who doesn’t remember making daisy chains as a child? Again, this concept is still being honoured today – Marc Jacobs! 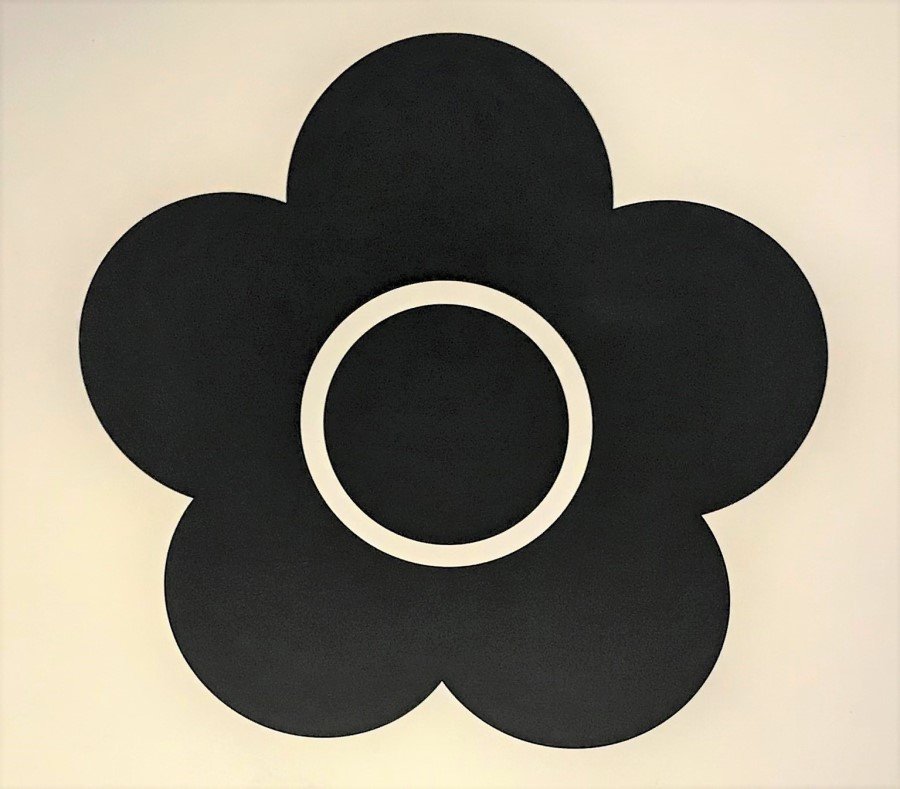 Attention to detail and a cohesive design language

Her shop windows became installation art – crowds gathered to see the next outrageous unveiling. Much emulated by Harvey Nicols and then Selfridges in the 90s.

Packaging was meticulous – from the boxes, to the tags and the bags. Even the shop fittings were on brand. To buy Quant, was to buy an experience.

The clothing range was to have the core Quant label plus a separate label of Ginger Group. Each with its own identity, but both clearly connected.

Her written communications to future retailers are exquisite; with concept sketches from her own hand – her fashion illustration degree clearly visible.

The business appears to have organically evolved, when another shop opened. This time providing Terence Conran with one of his first commissions. Clearly, she recognised another designer on the brink of future success.

The more she sold, the more machinists she employed; and we assume the more support staff employed.

By the 1960s when London appears to have caught up with her. For close to a decade she had honed her craft and polished her identity before her company grew globally.

Leading through fun, passion and belief in the product

Film reels of the time show Quant in her studio, surrounded by teams of smiling staff. The smiles didn’t appear fake and staged for the camera. Her team seemed genuinely energized and alive with passion for the brand and enjoying their work.

Her catwalk shows seemed to have been a riot. There were interviews with past models who glowed when recollecting the fun they had – more like a party than work.

Cleverly, even in the early days, she priced to aspire, making her garments coveted and valued. And of course her bank balance healthy, to support steady growth, fund brand development and allow experimentation.

She had created a demand.

As her skirts shrunk in length, she added tights to her range – with names like Starkers! Some might only be able to afford a pair of tights, but they could still be part of the club.

It was only once she was fully established and demand selling globally, that she targeted more budget options for her goods – partnering with Butterick to design sewing patterns and selling through catalogues and developing a range of affordable cosmetics – setting a template for others to copy.

By the 1970s recognizing her core clients were starting families, she produced a range of Daisy dolls with of course, an enviable wardrobe.

It was 8 years between starring as a buyer, to becoming the look of a decade, and within 15 years she was selling globally (selling more than clothes and catering for all budgets) – everyone could have a piece of her magic.

Phenomenal for someone with no previous knowledge of the industry – perhaps this is why she was so successful – she had no business training and so brought fresh perspective and appetite?

How did she maintain quality with such growth?

Remarkably, Quant appears to have maintained the energy and creativity of her brand, in spite of (seemingly) fast growth and huge demand, all the time never losing sight of her design vision and brand message.

Lesser businesses often go-under at the point of rapid growth.

Quant seemed to thrive seeking new opportunities every step of the way. Her energy, passion and willingness to learn appear without limits nor contagion.

Any designer – be they architect, product, graphic or fashion designer – understands, to grow at such a fast pace, while still maintaining the original vision and quality, requires a passionate and solid team behind you.

Quant must, not only have been a great designer and businessperson, but also an expert recruiter and leader – visionary in her reach.

Lessons we learn from Quant

Design what you believe in.

If you don’t know how to do something – learn.

Don’t be afraid to start-out at the bottom.

Create your own momentum – don’t wait for the right time.

Learn your craft – at all times.

Carry the message through to all levels of the design and the business.

Embrace all potential customers – but only when the timing is right.

Have fun, enjoy and be passionate.

Of course, the exhibition was curated carefully to show only the best of her work and summarise a prolific career, but we did leave with more questions than answers…..

What was her husband’s role in the business as it grew?

What were her mistakes – it’s from these that we generally learn the most.

When and why did the company draw-to-an-end?

Who were the passionate creative people behind the woman? The unsung heroes?

How did she maintain ‘the look’ as the company flourished?

Did being so associated with a decade become a mill stone around her neck?