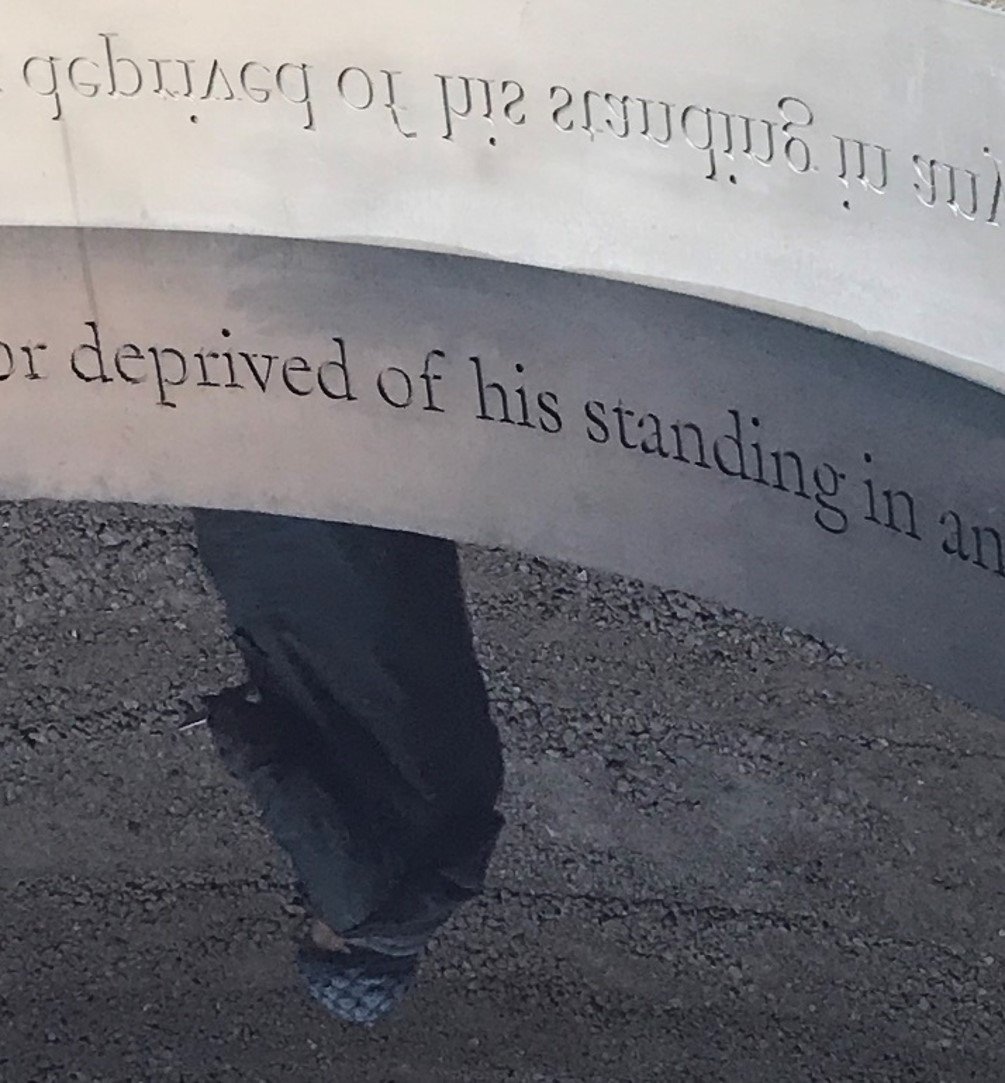 More sculpture than building in the truest sense, it was still definitely worth a visit. Although next time I’d take wellies, the approach to the entrance was a bit muddy.


Positioned in the low-lying flat landscape, its quite bunker-like in appearance.

The proportions of the entrance set my teeth on edge. I felt it could be a taller and narrower (possibly the same proportions of the small openings at the ground?). A slot maybe or even a wrapped hidden entrance. Added to that was the constant buzz of the nearby road and roars of planes from Heathrow.

I didn’t have high hopes. 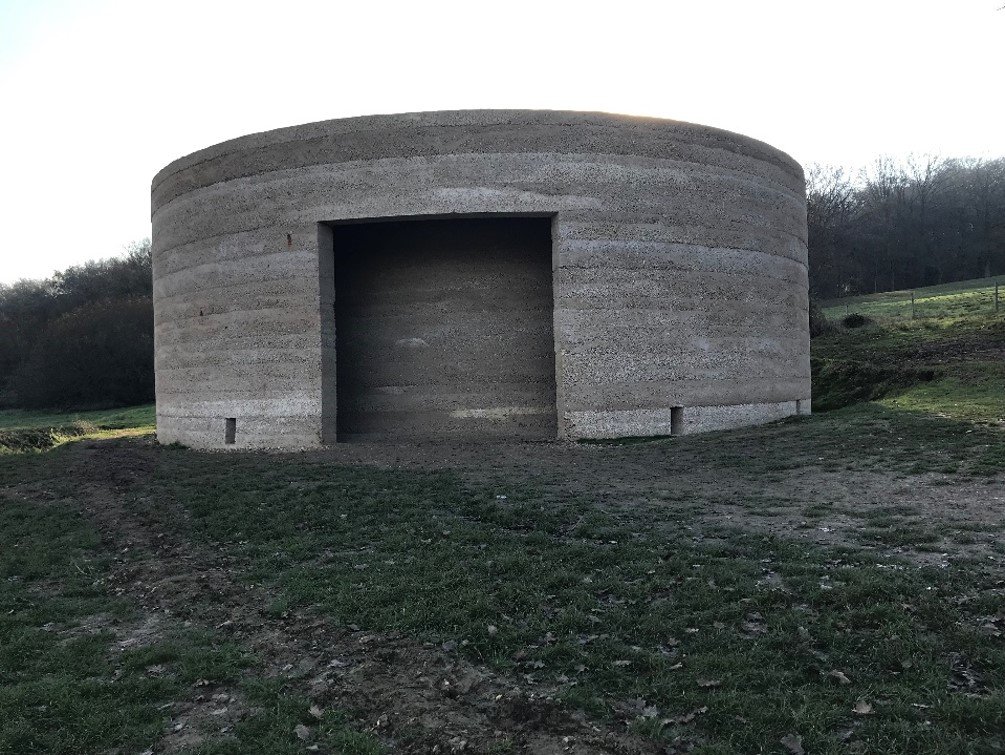 The building told me off

I love it when a construction, by its very design, can almost tell you off for having misjudged it.

This is one of those buildings : cleverly designed with a series of devices that work together. Cleansing visitors from the outside world, adjusting their mood and then guiding intuitively.

Under foot, the mud changed to soft dry earth, so walking became easier.

Light levels dropped dramatically and we were forced to slow down to allow our eyes to adjust, finding ourselves in a curved corridor of rugged ‘Rice Krispie’ walls. Rammed earth and stones taken from the site. 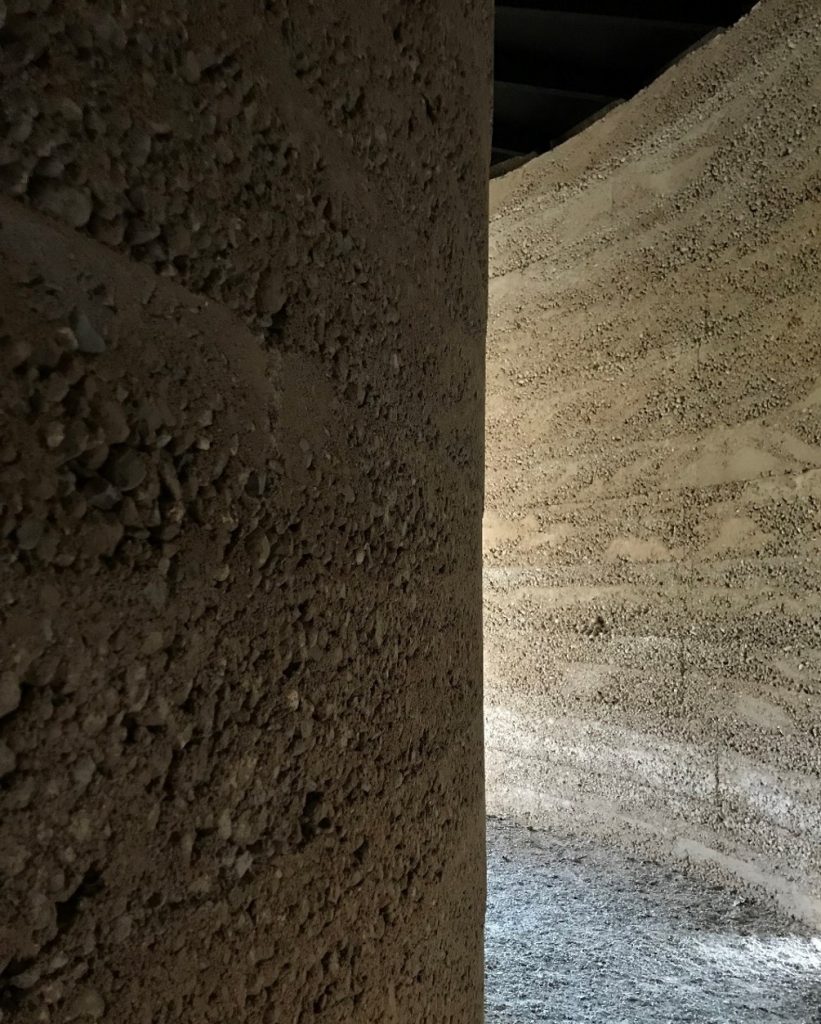 This rough aggregate, worked both to absorb all the outside noises and – in turn – play with what little light there was. Softening it, creating shadow and tones. Our paced slowed.

Regularly spaces low level cat flap like openings filter light in, leading us along the curved corridor towards the centre of the building. 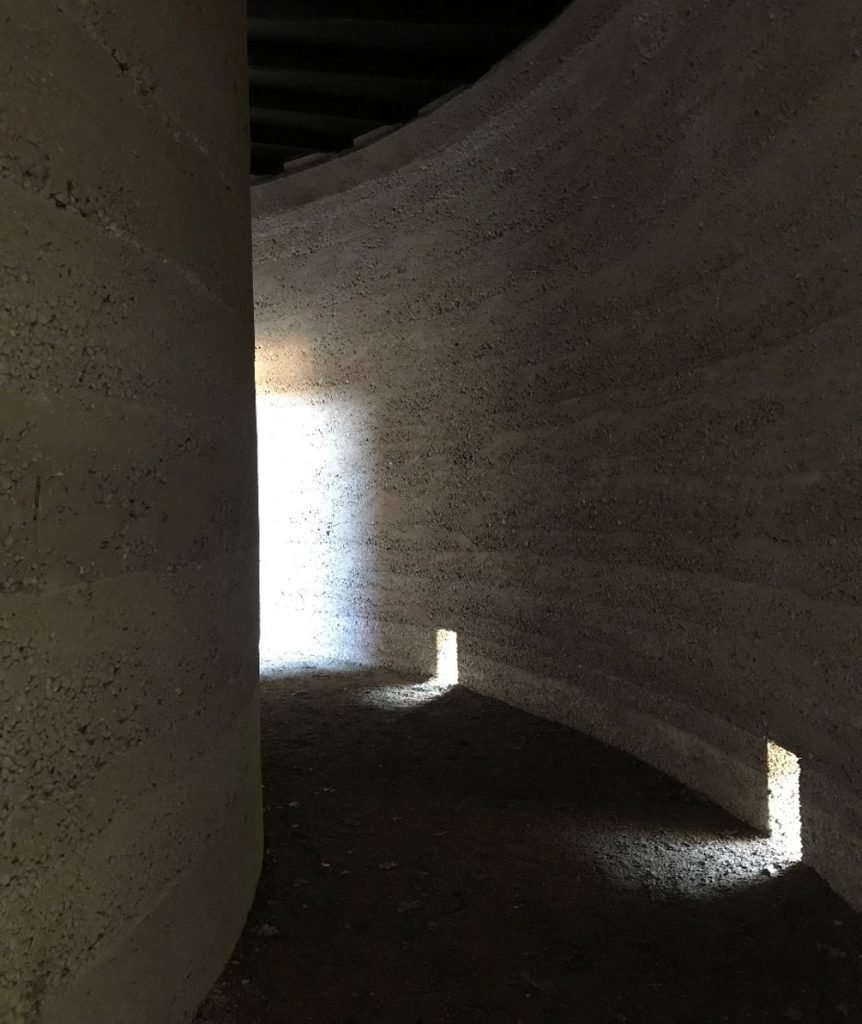 This was more reminiscent of an ancient monument, than a building of a few months of age. 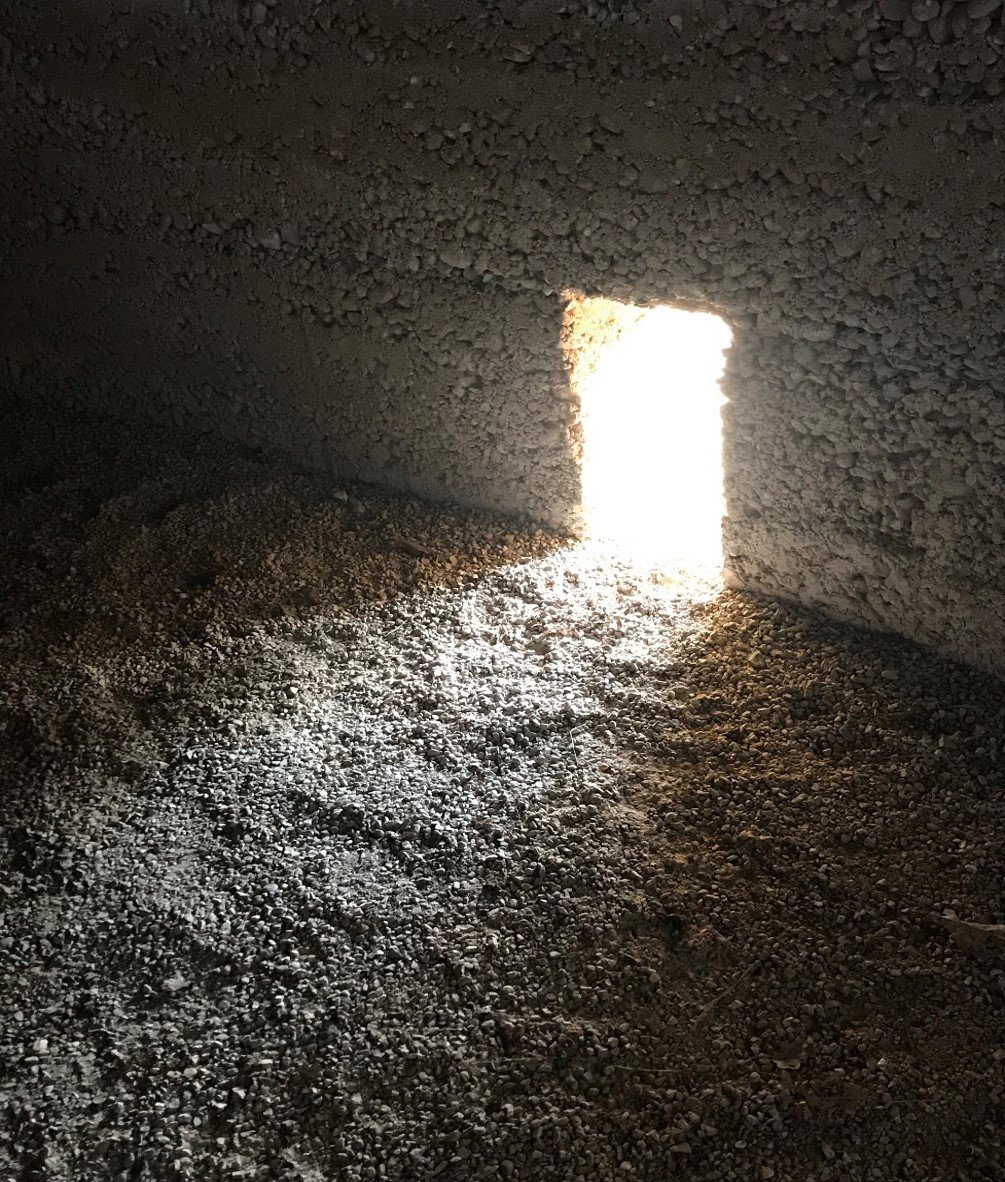 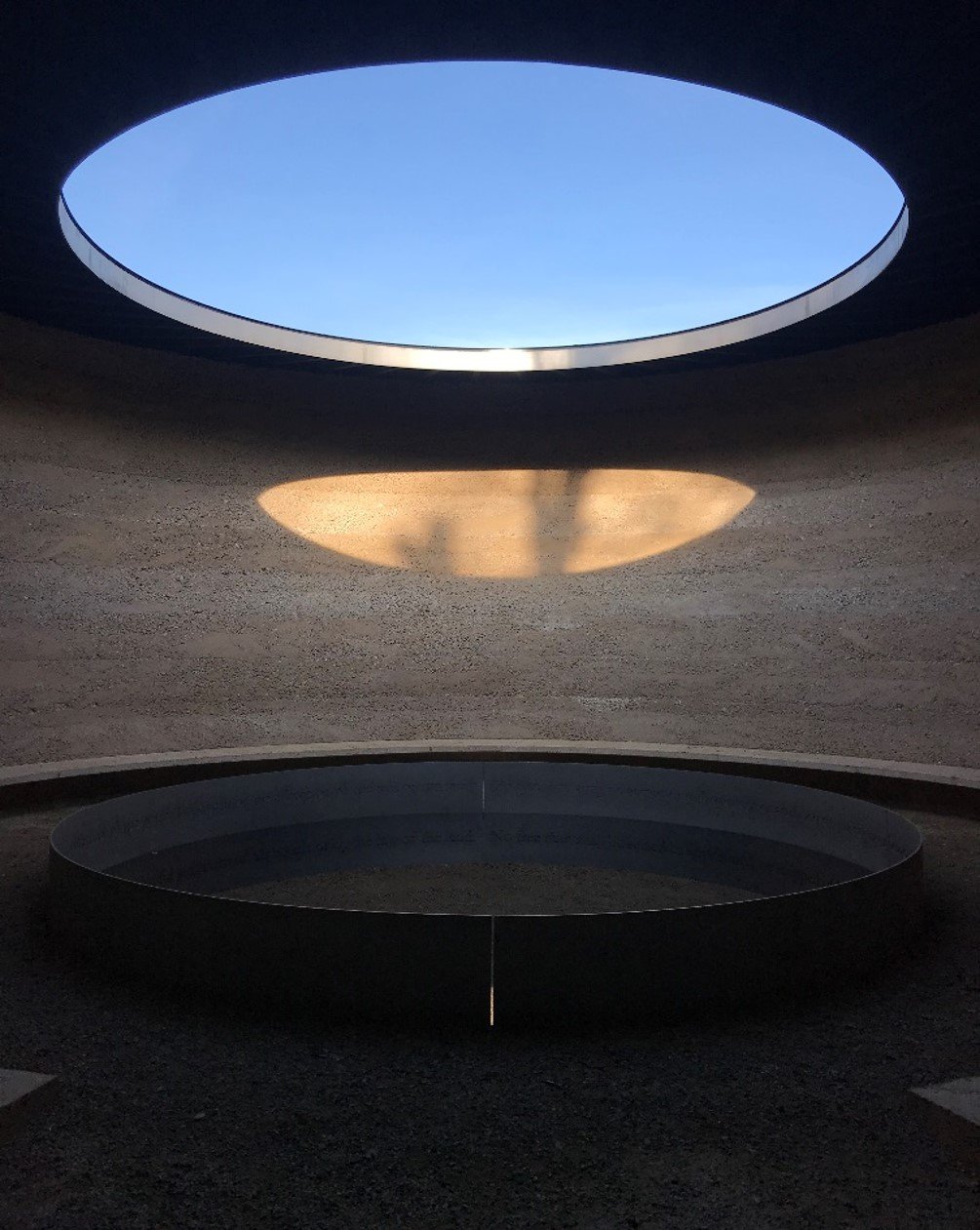 Open to the elements. A circular opening in the roof – an oculus – sits over a calm dark circular pool of water.
Once again, we were aware of the outside, noticing the clouds, and planes passing above – this time much more quietly. The aggregate still worked its magic to deaden the acoustics. 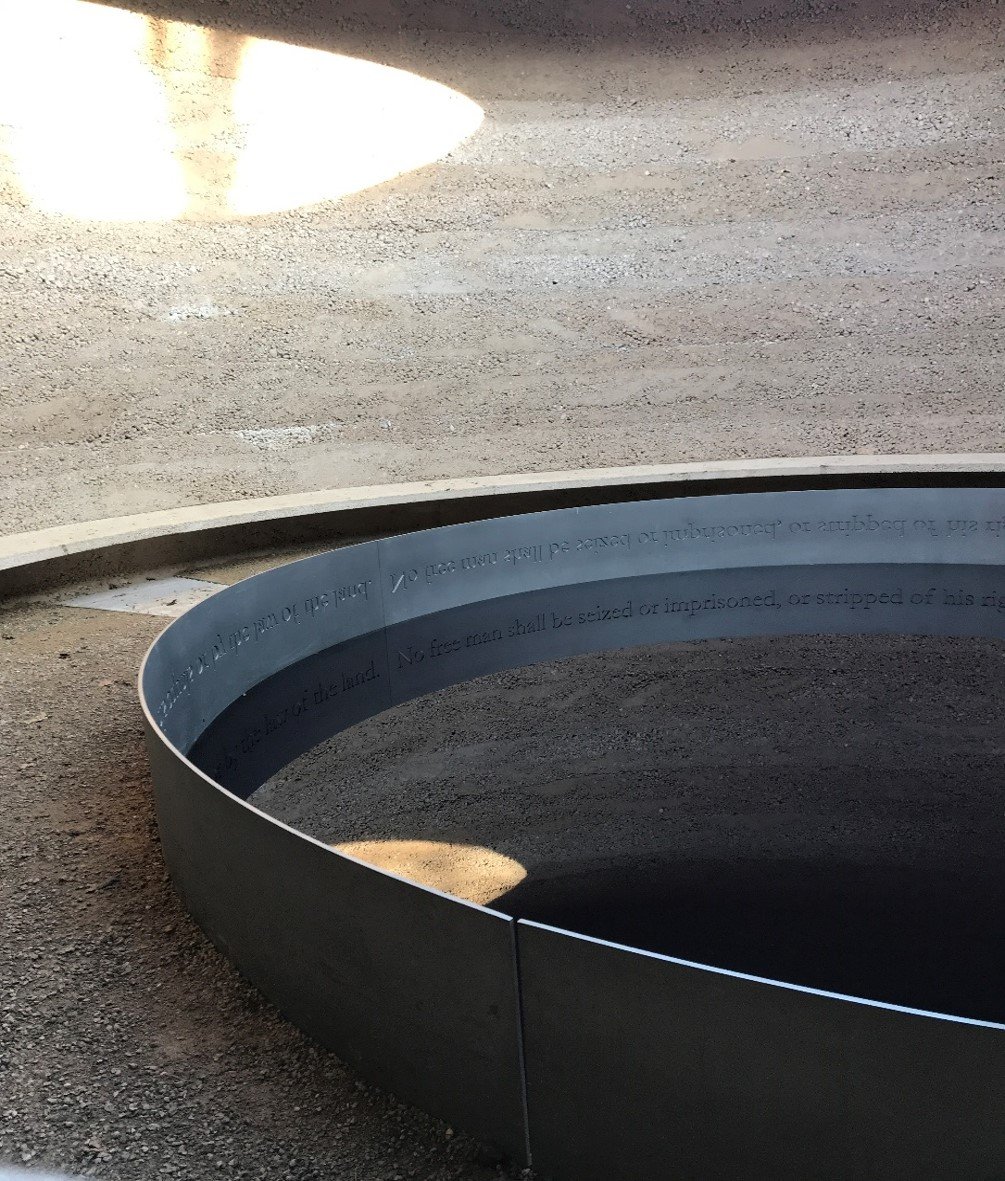 A metal collar of inverted words surrounds the pool. Upside-down, the words catch your eye, and confuse for a moment until you realise the only way to make sense is to view through the water’s reflection and walk the full circuit of the pool..

Yet another clever device to focus the visitor on the true function of the building.

The words are taken from Clause 39 of the Magna Carta – the document penned by the Feudal Barons, who then forced the wayward King John to seal it over 800 years ago in Runnymede. It became the founding principle of Common Law:

“No free man shall be seized or imprisoned, or stripped of his rights or possessions… except by the lawful judgment of his equals or by the law of the land.” 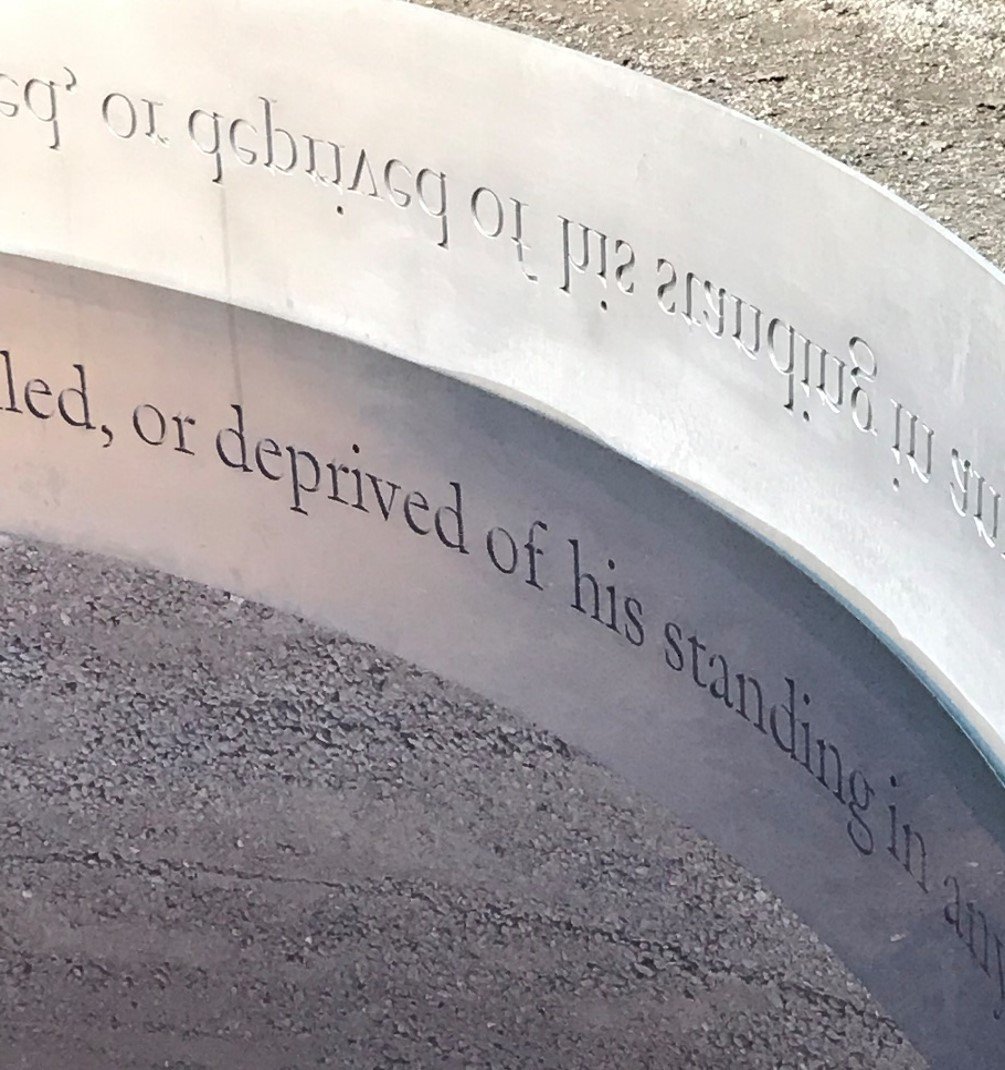 This is a building with a strong sense of place and gravitas. It communicates, not just with the words etched into its fabric, but through its setting. Materials, and the very simplicity of its architecture.

Much more successful on the interior, than the exterior, every detail of this building has been thought through to ensure visitors are aware they are in a place of great importance.

This is a building that communicates.