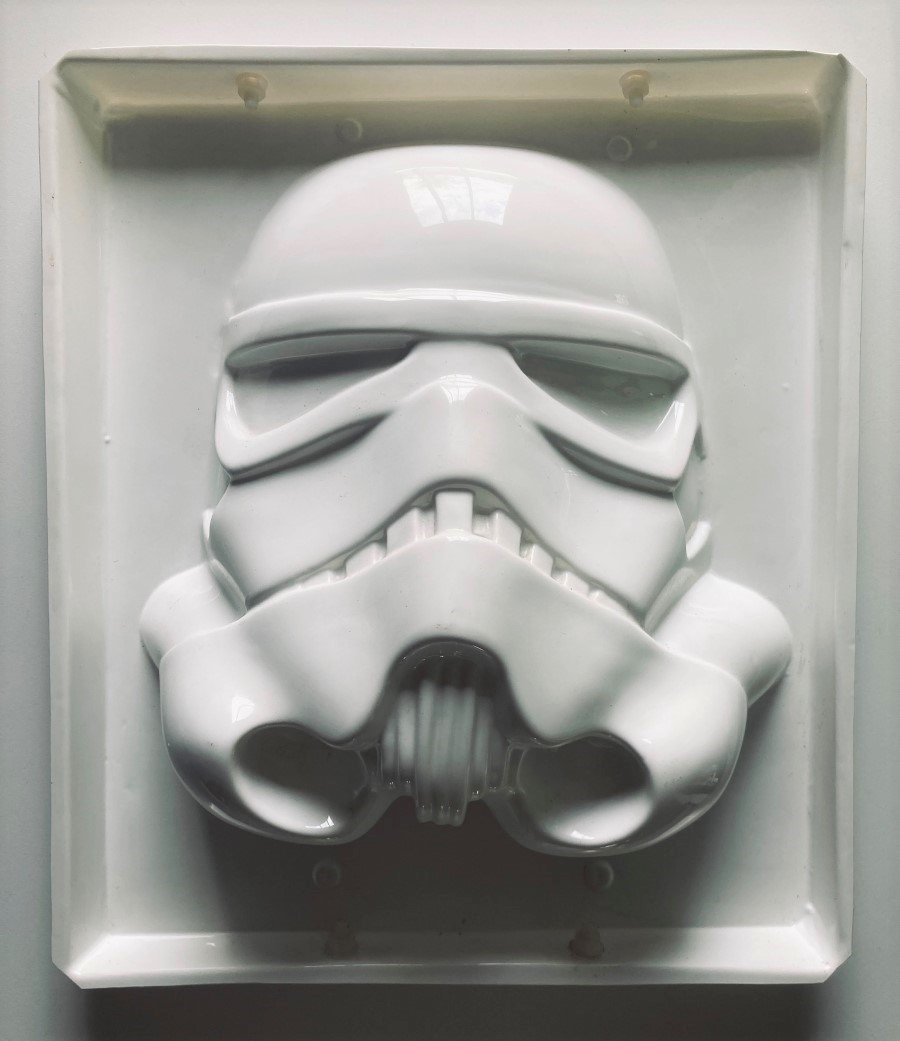 Andrew approaches each of his diverse interests with all senses on high alert, embracing them with a fascination for the finest details, whether it’s twitching (that’s bird-watching to the uninitiated), cars, tropical fish, Fantasy Football, making model aeroplanes or his latest venture; a microbrewery using his own home grown hops.

I first met Andrew through our children, who shared a love of Star Wars.  When he learned the Stormtrooper costumes for the original 1977 film were conceived and fabricated nearby in Twickenham, he planned a secret expedition to this holy grail.  With his characteristic attention to detail, Andrew had the famous Star Wars ‘Imperial March’ theme tune playing as we walked through the mist towards the workshop, amplifying the entire experience for our extremely excited Jedi wannabes.

The passion for creating the perfect atmosphere translates through to Andrew’s design work.  One of his particular specialisms is lighting, generating bespoke solutions to tailor the environment inside and out.

This is just one of the skills he brings to the table as he joins forces with Jane O’Connor at JOA.  Together they form an impressive partnership with skill-sets that neatly dovetail like impeccable joinery.  Jane’s strengths at the front-end (understanding clients’ needs and quick, conceptual responses to spaces) are supported by Andrew’s excellence on construction detail and delivery on site. Together they collaborate on detailed design and planning using their respective expertise and talents.

Today we are chatting about his career to date as he embarks on this exciting new chapter.  We’re heading towards JOA’s new offices, and we are taking the scenic route.

Approaching Bushy Park he has already pointed out design features on parked cars as we walk by  and his anecdotes are peppered with details of the cars that he has known and loved over the years. A favourite memory is of a childhood visit to Loch Lomand, the unlikely home to a bear sanctuary throughout the 1970s.  His father’s pride and joy at the time was a 1972 ‘Saturn Yellow’ Audi 100 saloon and he had decorated it with sprigs of heather woven through the interlocking 0000’s on the car’s front grill: “A bear, but not just any bear – a grizzly! – came out of the woods and lifted up the front of the Audi, tilting the whole car with my brother and I screaming in the back.  The bear detached the grill with the heather, set the car down again and disappeared back into the woods.”

Perhaps surprisingly, the experience didn’t put him off the Highlands for life and he chose the University of Dundee for his two Architecture Degrees, only returning to his native Manchester in between for a placement year in the heart of the city during its late 80s ‘Madchester’ heyday (attending the Stone Roses Blackpool gig – amongst others – in his spare time). He went on to secure his first Post Graduate job at James F Stephen in Glamis, a practice located in a glen North of Dundee and South of the Grampians, where he honed his skills working on University projects, National Trust visitor centres, social housing and sheltered living accommodation which he describes as an invaluable experience early on. The practice has since been the executive architects for Frank Gehry’s Maggie’s Centre and Kengo Kuma’s V&A – both in Dundee. 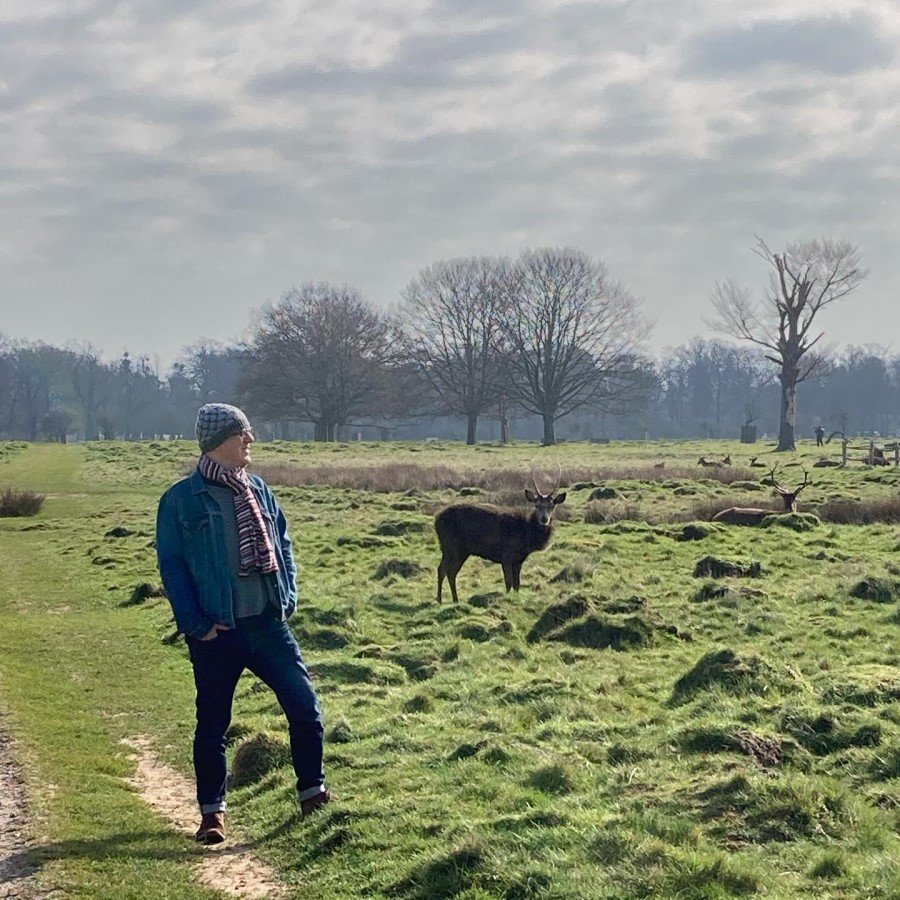 Our walk through Bushy Park has now veered off the beaten path, cross country towards a cluster of trees.  “Listen!” there is a tap-tap-tapping sound overhead.  Even I can guess with reasonable confidence that it is a woodpecker. Yes, Andrew confirms that sound is a Great Spotted Woodpecker, tapping at the bark of trees to announce his territorial rights at the beginning of spring, but there is another sound.  “Listen to the song.  That one’s a Green Woodpecker.” He spots the bird almost immediately.  It flies low to the ground looping over the grassy tussocks, pausing briefly to bury its long beak in search of food, before darting off again. He often spots these woodpeckers burrowing for grubs on the lawn of his own home which borders onto Bushy Park with a Grade 2 Listed Ha-Ha* at the end of the garden.  It’s a wonderful location where he can fully enjoy a huge selection of wildlife wandering in and out of his garden while only a stone’s throw from the centre of London.

Andrew was lured away from the Highlands to the bright lights of London in the early 90s by a role at Studio Downie Architects, where he worked on some extraordinary projects such as the Sculpture Park at Goodwood and the Royal Geographical Society IBG in Kensington.  Housed in a beautiful Norman Shaw Arts & Crafts building in Knightsbridge, the RGS was securing Lottery funding to improve its facilities. He describes his first visit to the building, “You would not believe this place.  All the great explorers’ maps, photographs and records were there, crammed in every nook and cranny. The Everest Diaries were stashed behind a water tank and wooden sleigh’s were shoe-horned between a basement wall and an oil tank in the plant room (these turned out to have belonged to Captain Scott from his ill-fated visit to The South Pole). “

The brief was to provide the correct standard of archive storage to preserve the collection, a reading room and public display facilities – all of which had not existed previously. They developed an ambitious plan to create these facilities in a modernist palette of expressed concrete, glass and brick – 80% of which is underground – adjacent to the Grade 2* Listed building.  A dream project for a young architect, but one which involved navigating a sometimes tricky path between the criteria of the Heritage Lottery Fund, conservation teams and planners, and the client.  An example he cites is the planners required a metal roof which complimented the existing lead roofs. Instead of specifying lead again, copper (with over twice the longevity of lead) was specified. After much research, copper sheet with a zinc coating was selected to mimic the neighbouring lead roofing. Time was also spent researching fair-faced concrete installations – the other major design element. The result was exciting spaces and the new public face for the Society.  The half-buried reading room has sloped windows level with the lawn outside, flooding the room with naturally controlled daylight (via vine ladders) and providing its occupants an ant’s eye view of the garden. It’s a project Andrew is justifiably very proud to have been part of.

In 2003 he joined SPINK, a property developer specialising in very high-end ‘Super Prime’ residential developments for a global clientele. For 17 years Andrew was an integral part of the design team, delivering the ultimate discreet elegance in detail which the generous budgets and sensible time frames allowed. As well as the usual architectural duties associated with the projects (these either being sensitive refurbishments of historic Victorian/Georgian residences or very considered newbuild modernist residences – the latter involving eminent architects, such as Sir David Chipperfield), he was also allowed the ultimate indulgence to design bespoke ironmongery, freestanding furniture and a collection of modern light fittings. Lighting has always been a specialism for Andrew and he particularly enjoys working closely with lighting fabricators to achieve unique solutions, utilising the latest in control technology and materials.

He remembers one particular project: “I was working on a Georgian mansion set in 100 acres, near Henley.  I worked into the night with the garden designer and electrician to create a physical mock-up of the lighting design in the dark.”  This level of perfectionism is characteristic of Andrew.  He merges a deep understanding of the technical elements of construction with a very strong design eye.

Jackson O’Connor Architecture has found a home just up from the river bank in Hampton.  Once open, the studio will combine offices with a gallery showcasing Jane’s ceramics, another example of the cohesion of skills this partnership brings. He’s excited as he shows me how perfectly the Edwardian building frontage is angled to allow space for the signage he has been designing for both of these ventures. 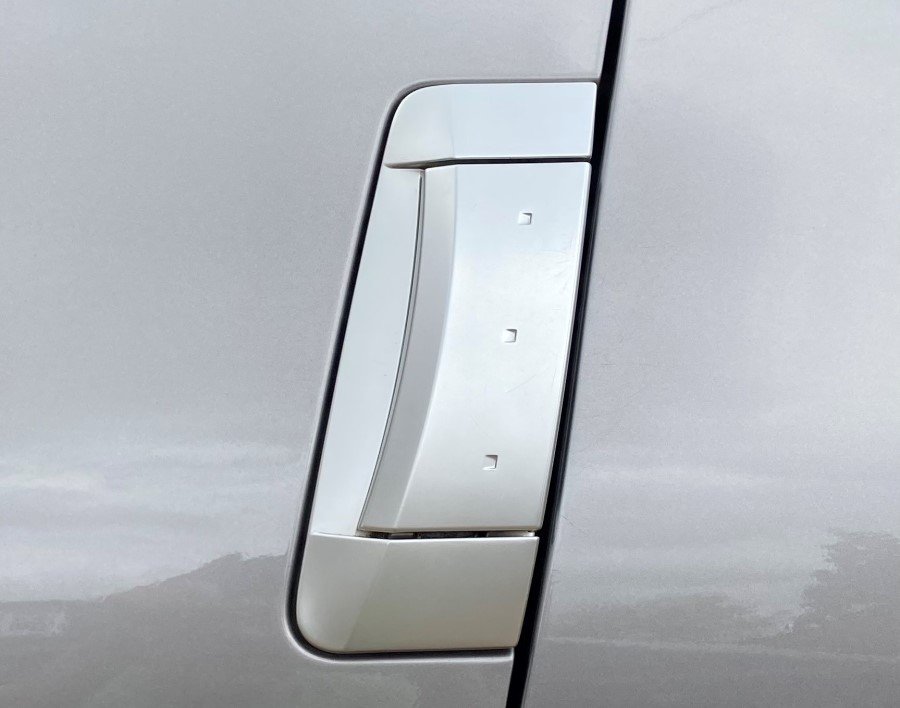 Andrew’s eyes light up as a 5.0 litre V8 Mustang approaches.  “Shhh, Listen!”.  The car purrs past us like a huge, contented lion. Slightly wistful, he comments that in another life he would have loved to have been a car designer. Car design’s loss is obviously architecture’s gain.

*Originally a feature of formal French gardens of the early eighteenth century, a Ha-ha is a sunken channel used in place of a fence to keep livestock and other animals out of the garden without interrupting the view of the landscape beyond.  ‘Ha-ha’ is the sound made when unsuspecting guests ‘discover’ the hidden ditch.